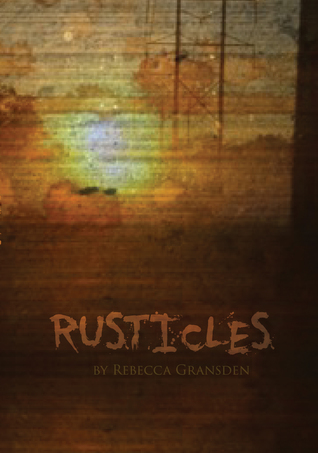 Rebecca Gransden’s Rusticles quickly makes two things apparent. First, it lends its focus most intently on sensory language and imagery (consider introductory story “The Neon Black”‘s opening line: “Out of the blue and into the black neon night, along a street made of pulse shaking off its dreams”). Second, this book has very little use for the standard ingredients of narrative fiction. Full of cryptic, off-kilter language and scenarios driven by obliqueness and obscurity, Rusticles declares itself as something other than a collection of plot-driven stories. In this way, it instructs the reader to read in an unusual way.

Although it bears hints of magic realism, dark fantasy and horror, the book never announces its station within a certain genre camp. Its deft and mysterious relationship to genre brings to mind the works of Daniel Braum, but Gransden’s commitments are so much different than those on display in a book like The Wish Mechanics. Rusticles is so strikingly anti-narrative that it is actually incredibly difficult to describe its contents in any detail.

The book displays interest in the possibility of loosely impressionistic fiction-writing, wherein plot is not only secondary to mood and atmosphere, but is actually lingering somewhere outside the pages. These stories are made up of residue, periphery, those ingredients which usually go ignored. It is a bold and sometimes fascinating approach to fiction-writing. Unusual syntax abounds, with occasional bursts of remarkably focused prose that borders on poetry. One line from “The Boy at the Table” stood out to me in particular: “He was a picture made of sand.” I don’t think I know what it means, but I really like the way it reads. Interestingly enough, I could apply this same sentiment to the majority of the book. Gransden demonstrates a unique point-of-view with this collection, and for that reason alone it is worth a read.