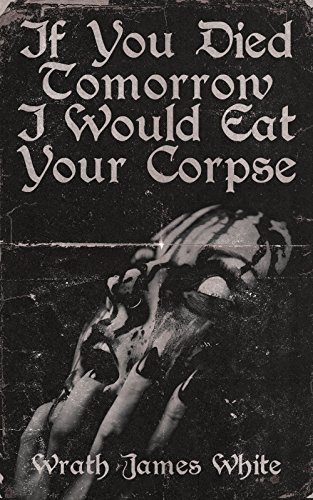 Author Wrath James White’s reputation precedes him. More often than not, when I see mentions of his work, they’re within close proximity to some variation of the same signifiers: “extreme,” “hardcore,” “transgressive” and “disturbing.” His new poetry collection If You Died Tomorrow I Would Eat Your Corpse earns every single one of those terms. If the killer in William Lustig’s Maniac (1980) sat in on afternoon Byron seminars before going out for his twisted nighttime excursions, the verses looping through his mind might read something like this book’s contents. For literary comparisons, imagine the protagonist of Hubert Selby Jr.’s The Room (1971) waxing poetic in the midst of sadistic fantasies, or Poppy Z. Brite’s Exquisite Corpse (1996) written in disciplined metre.

Yes, this book is very much of a specific sensibility, and it’s very much for specific tastes. The first half is especially demanding and confrontational, almost monomaniacal in its emphasis on masculine power, domination and sexual violence. The language is often viciously blunt, and always uncomfortably intimate. I would be lying if I called this thing an easy read.

However, to my mind, the book’s sincere core of intimacy elevates it, preventing it from simply existing as an object of transgression for transgression’s sake. Wrath James White’s use of language is always controlled and efficient, and at times shockingly beautiful, even painful in its precision. To my surprise, I think Corpse is soaring highest when it’s at its least embodied—I’m less moved by its explicit detailing of sexual encounters (although they’re well-written), and more by its stretches of existential angst and vivid abstract imagery. The book’s second half seems to find Wrath James White pulling away a bit from the snarling carnal frenzy that comprises the first half, and that’s when his Romantic heartbeat sounds loudest. Many excerpts from this section achieve their impact by defiling and resisting religious iconography (this book is absolutely boiling with Christian symbolism—mentions of Christ, altars, heaven, hell, angels and demons abound).

The most honest and direct thing I can say about If You Died Tomorrow I Would Eat Your Corpse is that it affected me in a rare way, and that I’ve never read anything quite like it. Proceed with caution.