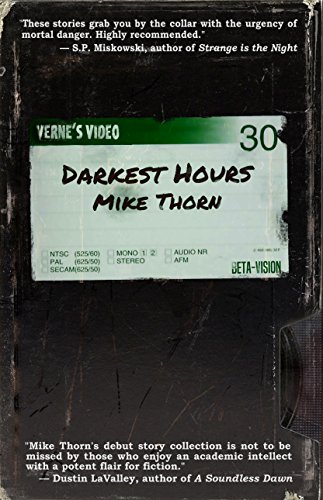 Darkest Hours is now available for pre-order in eBook format. Click here to get your copy. Official release date for paperback and eBook: November 21, 2017.

Early Accolades
“In these sharply compelling stories Mike Thorn intertwines the bizarre and the quotidian to form seamless chronicles of personal disaster. The protagonist may not know the precise nature of the catastrophe heading his way, but you get the feeling he’s been anticipating something bad—and inexorable—for a long time. This rueful wisdom, a product of youthful disappointment and early trauma, informs each tale as it winds its way toward a natural yet surprising conclusion. The element of surprise is a tribute to Thorn’s ingenuity; the assuredness of his prose is due to his extensive knowledge of the horror genre. Perfectly paced from the first sentence, these stories grab you by the collar with the urgency of mortal danger. Highly recommended.”
— S.P. Miskowski, author of Strange is the Night

“Everyone has their own mythology. Most people, however, don’t recognize it as such. Mike Thorn gets it. His fiction seems to blur distinctions between horror and noir, between science fiction and fantasy. Between dream and reality. They’re all here. Demons. Monsters. Big ones, little ones. (Sometimes the things done to them are worse than the things they do.) When you first encounter Thorn’s writing, a number of qualities impress themselves: the macabre intelligence (brutal really), the chilling wit, the naturalness of the dialogue. Plus there’s the skill and style of the prose. It may all play out like a nightmare, but a terrible logic remains inherent. His characters make bad choices, and it’s those decisions that bring on calamity. At once, the reader recognizes this. Mike Thorn is inescapable, and he understands that most terrifying variety of monsters, the hidden ones, the inner ones. They’re on display here. Savor the experience.”
— Robert Dunbar, author of The Pines and Willy

“Darkest Hours is for readers wishing to take a thrilling walk on the dark side. Mike Thorn has delivered a promising debut with this collection showing off his commitment to stories of nuance, heart, and of course… darkness.”
— Daniel Braum, author of The Night Marchers and Other Strange Tales

“I’ve long been a fan of authors who can create a style and allow it to be as important as the story itself. Mike Thorn is a prime example of an author who builds off the baseline mechanics of prose on his own terms, and in the process writes witty and honest, dark literary stories, as is the case with Darkest Hours. Mike Thorn’s debut story collection is not to be missed by those who enjoy an academic intellect with a potent flair for fiction.”
— Dustin LaValley, author of A Soundless Dawn

“Fast, fun and full of fear, Darkest Hours turns on a dime from a laugh to a scream. Terrifying and sly, Mike Thorn writes with refreshing originality and hides fangs behind a smile.”
— John C. Foster, author of Mister White