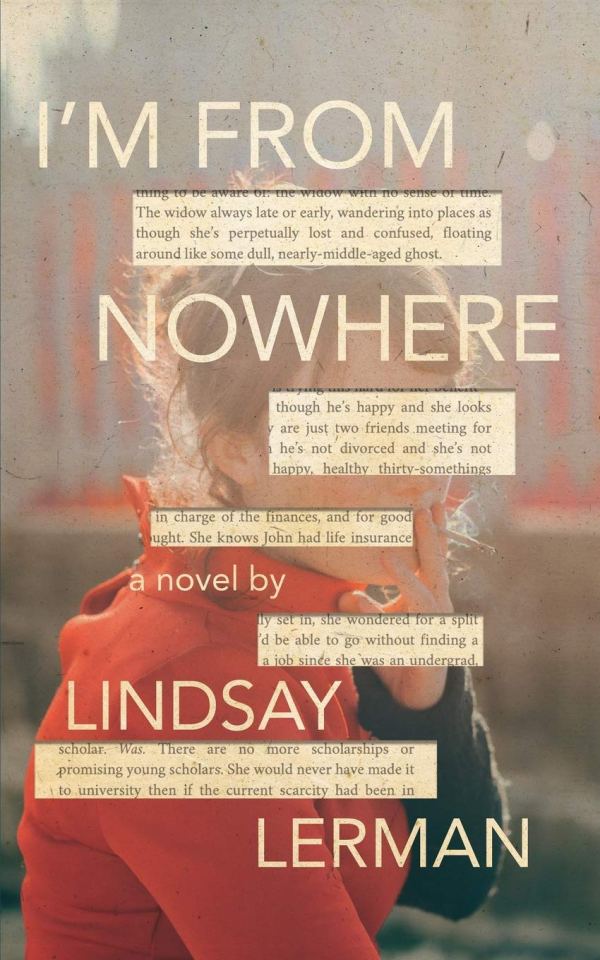 “Whether you think of it as heavenly or as earthly, if you love life immortality is no consolation for death.”
– Simone de Beauvoir, A Very Easy Death

To describe Lindsay Lerman’s I’m from Nowhere as a book about grief is accurate, to some degree, but it is also something of a reduction. The book brings to mind one of the most painful passages in Roland Barthes’ Mourning Diary: “Don’t say Mourning. It’s too psychoanalytic. I’m not mourning. I’m suffering.” Lerman’s book captures the magnitude of this suffering, the scarring nature of loss, the unfathomable nature of its somatic and emotional tolls. Tracing protagonist Claire’s early processing of her husband John’s premature death, this novel interlocks past and present to offer a stunning portrait of psychological ruptures, anticipatory mourning, and complex forms of libidinal desire.

Lerman expertly deploys flashbacks and interior monologue to study the imprint of memory on present experience, using Claire’s thoughts to reflect on the multifaceted nature of loss. Claire strives to comprehend the hidden corners of her deceased husband’s psyche, but Lerman beautifully demonstrates the impossibility of fully knowing another. In this sense, the book brings to mind Jacques Derrida’s The Work of Mourning, namely the philosopher’s statement that “the [deceased] friend can no longer be but in us, and whatever we may believe about living-on, according to all the possible forms of faith, it is in us that these movements might appear.” The novel explores Derridean notions of mourning through Claire’s inner questioning: “What self was there worth defending or preserving if John and his self, so mingled and fused with hers, would eventually be gone?”

Some of the book’s most painfully resonant passages arrive in its study of a relationship’s lifeline: Lerman showcases an awe-striking ability to capture love’s inchoate doubts, the transformation of passion, the essentiality of commitment and faith above all else. Love is the meeting of two subjectivities, universes of individual traumas and embodied experiences and biases and neuroses, and mutual conviction is a necessity for its survival. One chapter closes with a mournful moment of reflection, in which Claire notes that “All any of us has is each other” before sharing a simple, elegiac expression of grief-denial: “Don’t leave.”

At two key moments in the novel, Claire shares the belief that “Love is never far from fear.” This statement  captures the aforementioned faith at the foundation of love, but also the inevitable and anticipatory mourning imbedded therein. Derridean scholars Pascale-Anne Brault and Michael Naas note that, “[t]o have a friend, to call him or her by name and to be called by him or her, is already to know that one of the two of you will go first, that one will be left to speak the name of the other in the other’s absence.” Through brilliant psychological and narrative construction, Lerman accentuates this idea throughout.

The present sees Claire navigating the advances of two men, Andrew and Luke, who see opportunity in the immediate wake of John’s passing. Lerman is adept at depicting the complications of Claire’s intimate encounters: reverberating with tension, but also underscored above all by the heartbreaking need to confirm that she still exists.

This is an extremely special book, an instant favorite, and one of the few reads in recent memory that made me cry. Seek it out.